How to Roll Like a Pro: The Ultimate Guide 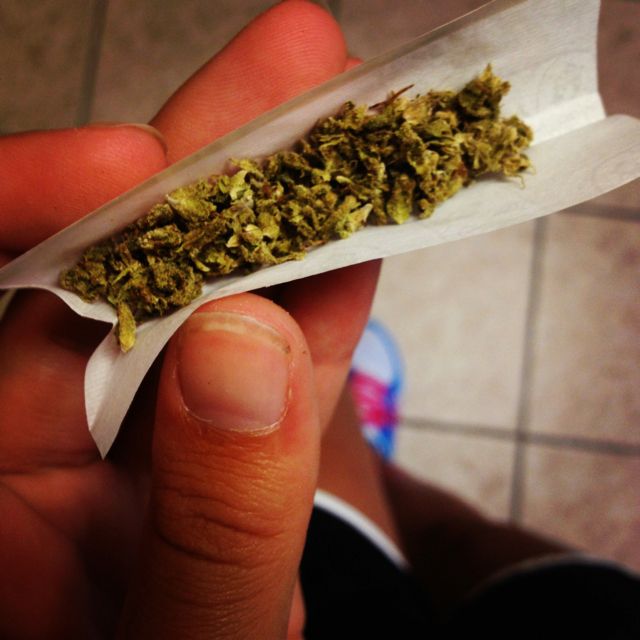 There’s nothing more relaxing than sitting down with your friends and unwinding over a phat (with a ph) king-sized joint.

And hey, if blunts are more your thing, that’s cool too bro.

In this guide, we’re going to cover the basic rolling techniques that you can apply to every type of roll, regardless of the wrap you’re using.

Learn How to Roll

The Art of Rolling

Smoking a fat doink is awesome. So is getting high, for that matter.

Unfortunately, rolling isn’t as easy as it looks, especially if it’s your first time.

Snoop Dogg didn’t learn how to roll overnight, and neither will you.

Now, you may be asking yourself:

How do you roll perfectly, every time?

Rolling is an art that takes time and practice.

It took me a long while and too many wasted joint papers and blunt wraps before I learned how to roll a fat doink.

When I first started rolling, I quickly became frustrated.

I’d rip the joint paper when I was trying to roll, the glue never seemed to stick, and sometimes when I managed to roll a joint, it didn’t seem to burn well at all. 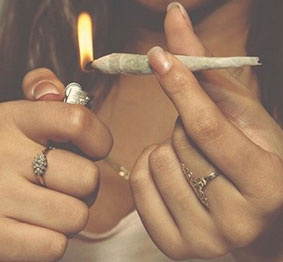 Now I smoke big doinks only, and I’ve learned a substantial amount about rolling along the way.

That’s why I’ve created this guide – I’m going to give you all of the tips I wish I knew when I tried to roll for the first time.

You won’t be a joint rolling Jedi master immediately, but the information in this article will surely save you time, headaches, and torn wraps.

Consider me your joint rolling Obi-Wan Kenobi and you’re my young padawan.

And if you haven’t seen Star Wars, here’s a quick translation:

I’m your weed rolling master, and I’m going to get you hip to some dank rolling tips.

Without further ado, let’s get smokephisticated.

Before you get rolling you’re going to need a few tools, some of which are absolutely necessary, while others are just convenient.

Either way, all of these rolling tools will make your life a whole hell of a lot easier. 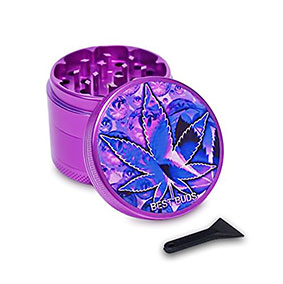 A grinder is a stoner’s best friend, and for good reason.

If you’re rolling a joint, you’ll need to be using a grinder.

Sure, you could break up the weed with your hands, but the joint wouldn’t smoke well at all.

Joint papers are too thin to smoke without ground up weed – the paper will burn more quickly than the weed, and you’ll be out of luck.

When rolling a joint, grinders are a stoner’s best friend. 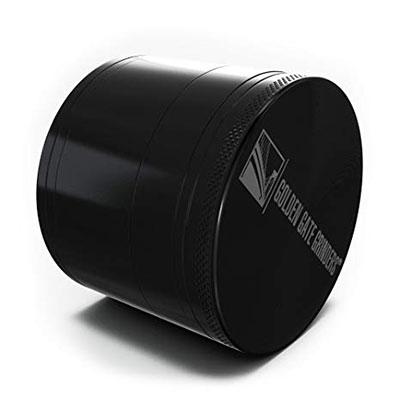 If you're in the market for a grinder, we'd highly recommend this 4-piece herb grinder from Golden Gate. It's a 2.5-inch grinder with a kief catcher, and it grinds better (and faster) than any other grinder I've tried. Don't believe me? It has over 2,000 reviews on Amazon and a 5-star rating!

On the other hand, blunts are an entirely different story.

Although you can use a grinder for blunts, I find it better – and in fact, easier – to roll blunts without grinding up the weed.

Instead, I’d recommend picking the weed apart by hand into tiny pieces.

You can also grind up weed for a blunt if you wish, but it won’t smoke as well.

Oh, and here’s another great thing about grinders: they gather your keef!

If you don’t know what kief is, you’re definitely missing out.

It’s basically all of the tiny THC crystals that fall off of the weed and it’s super strong.

Grind up enough weed and before you know it you’ll have enough kief to pack a bowl!

If you’ve been grinding up nug after nug, you probably have a ton of keef and little bits of weed stuck in your grinder that hasn’t fallen down into the collection chambers.

This next part may seem crazy, but trust me – it works:

Take your grinder, put a penny in the main weed collection chamber, and then put your grinder in the freezer for ten minutes.

Lastly, take the grinder out and shake it for about a minute.

When you unscrew the grinder and take a look at the kief catcher, you’ll notice a significant amount of kief has fallen down for your enjoyment.

I didn’t really know what else to call this one, so just go with it, okay?

Basically, you’ll want to have something like a pen or pencil with you that you can use to maneuver the weed in the joint and pack the weed tightly after the rolling is complete.

I like to use the tip of a mechanical pencil while I’m sitting at my desk – aka the rolling station – to move the weed around in my joint because when I use my fingers, sometimes the weed sticks to it.

Once the joint has been rolled, I usually have some extra room at the end where I stick the pencil to pack the weed further down into the joint.

The key to a nice joint is a tight roll!

Didn’t I just tell you to pack the weed with a pencil?

Well, yes, you want your roll to be firm. Still, if you pack the weed too tightly you’ll prevent air from flowing through the joint/blunt/backwood properly, and it’ll go out while you’re trying to chief.

Nobody wants a dud doobie!

Anyway, definitely keep a poker at the ready.

In case you weren’t aware, you can actually remove the flint wheel from a RAW lighter and use it as a poker.

This is a great feature, regardless of whether you’re rolling a joint or a blunt! 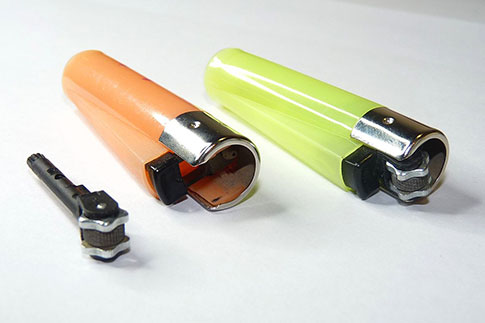 Every stoner needs to have a rolling station – that’s a given. Sure, you could roll right on your desk, but that’s not smokephisticated.

Rather, it’s best to roll on a rolling tray. Aside from looking pretty dope, they catch all of the weed that falls on the table during the roll. Trust me, it will happen. 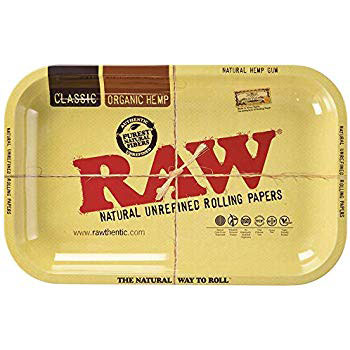 I’m basically like that guy who wears NIKE from head to toe but with weed products.

In any event, a rolling tray will make your day.

Rather, rolling machines will quickly roll a cigarette-sized joint in a few minutes, without you really having to do much.

I used to roll joints with my old RAW rolling machine when I wanted to smoke on the fly. They’re quick, easy, cheap, and best of all, they work pretty well. 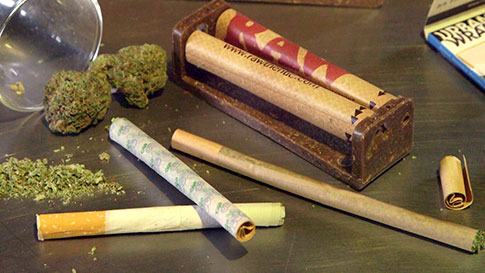 Long story short, you put the paper in the machine, fill it with weed, rotate the two wheels and voila: a perfectly rolled joint.

If you want to learn more, we have a guide all about rolling machines and how they work.

Now that you’ve got the necessary tools in hand, it’s time to set up. When you’re first starting out, your setup is crucial.

You’ll want to be somewhere comfortable – trust me, it’s pretty hard to roll under pressure.

For the first time, roll on your own, possibly in your room.

Roll in a location where you don’t have to worry about getting caught or having your friends watching you.

It’s like when you’re in school taking a test, and your teacher comes up behind you and looks over your shoulder to see what you’re writing.

I hated that, especially when I knew I hadn’t studied because I was smoking way too much weed.

My math teacher would stand over my shoulder watching me get everything wrong, chuckle, and walk back to his desk.

The point is, it’s best to roll stress-free when you’re learning.

Before you roll – whether it’s a joint, backwood, or a blunt – you have to prep your weed.

If you’re rolling a blunt, break apart the nugs with your fingers until they’re about the size of grains of quinoa.

Weed prepped for a blunt should look like the weed in the ‘hand ground’ pile: 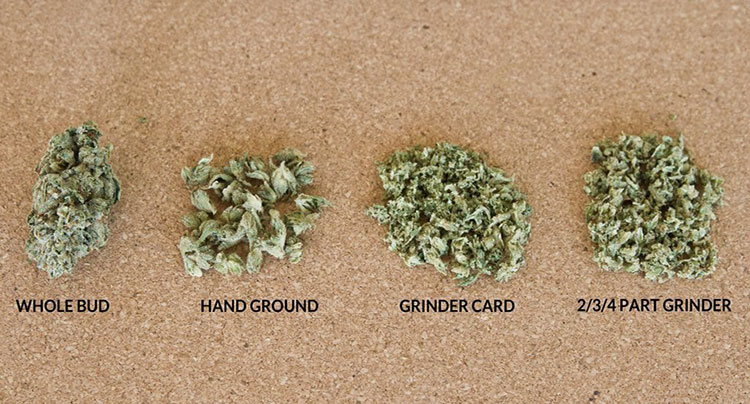 You shouldn’t grind your weed for a blunt because blunt wraps (tobacco leaves) burn more slowly than joint papers.

If you grind the weed, it’ll burn too quickly.

Moreover, the blunt will be more durable in the event of a fall or something of that sort.

If you’re smoking a J, on the other hand, you’ll have to grind up your weed.

Don’t grind the weed into powder, though – then it’s game over.

Joint papers are much thinner than tobacco leaves, and they burn more quickly.

If you try to roll a joint with weed nugs, the paper will burn faster than the weed, causing it to burn unevenly and fall apart.

Disclaimer: some may disagree. If you or your friends like to smoke blunts with ground weed and roll joints without grinding, that’s fine too. It’s a matter of personal preference.

I’m writing this guide with information that I picked up over the past several years. My aim is to share with you what’s worked best for me. Also, I don’t give a fuck if you disagree :D

Don’t have a grinder? No worries!

Rolling is an art. You won’t be a master doobie roller overnight, but with the right tips, tricks, and a bit of practice, you too can roll some pretty fat doinks.

And at the end of the day, there’s nothing better than kicking it with your boys and passing a doobie around.