How Does a Bong Work?

As opposed to dry pipes, a bong works by using water percolation and diffusion to make rips much smoother.

A vacuum-like airtight design forces smoke to bubble and diffuse as it travels through water, which filters contaminants and cools smoke.

Bongs also work by gathering a ton of smoke in the chamber so you get a massive hit straight to the dome when you clear it. 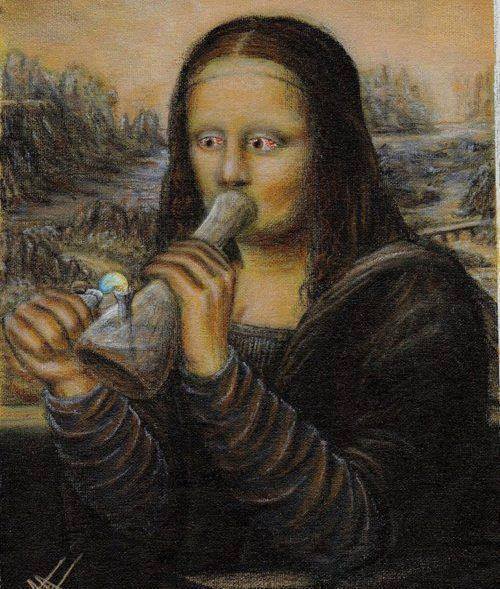 Most stoners understand that a water bong causes a smoother hit, but only a truly Smokephisticated toker understands the hows and whys of this process.

Percolation and diffusion go hand-in-hand but are often confused as the same.

Percolation is basically the process of water interacting with smoke bubbles in the bong.

The word percolation is defined as the process of straining liquid through a filter.

This stems from the Latin term percolare, which directly translates as: to strain through.

As opposed to brewing coffee, this type of percolation actually benefits your smoking experience.

There are countless types of pipes with different percolation methods, but the basic process and the advantages are all the same.

More time underwater leads to more thorough percolation — and therefore smoother and fresher hits — this is where the appeal of recyclers come into play.

The process of percolation takes place from when smoke bubbles submerge until they resurface into the neck of a bong.

When smoke submerges, it doesn’t enter as one single bodied pocket. Instead, smoke bubbles up into many little bodies before returning to the air.

However, between the submersion and resurfacing, these smoke bubbles are confined and forced through tight chambers and are constantly interacting with each other. 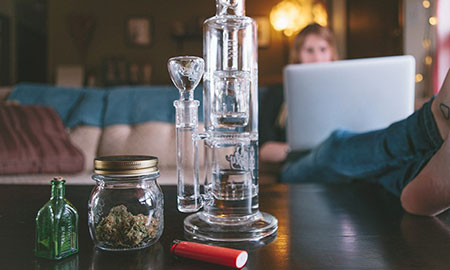 Submerged pockets of smoke are constantly dividing, collecting, and conjoining.

This ongoing underwater bong traffic is inevitable in percolation, but it is actually beneficial for your bubbles to be as separate as possible.

By using diffusers — or percs — we can encourage this separation of bubbles.

This process is referred to as diffusion, and it’s a big game-changer in percolation.

Diffusion is defined as the spreading of something more widely. In smoking, diffusion refers to the division of smoke bubbles.

A higher quantity of smaller smoke bubbles is actually more susceptible to the effects of percolation than a lesser amount of larger bubbles. 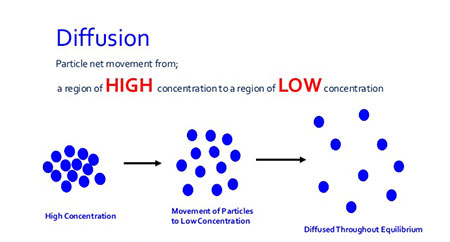 H2O can only interact and affect a bubble of smoke through contact with the surface.

Because of this, a higher surface-to-volume ratio will allow for a stronger effect in percolation.

Call me Alburnt Einstoned, because this is where stoner math comes into play: 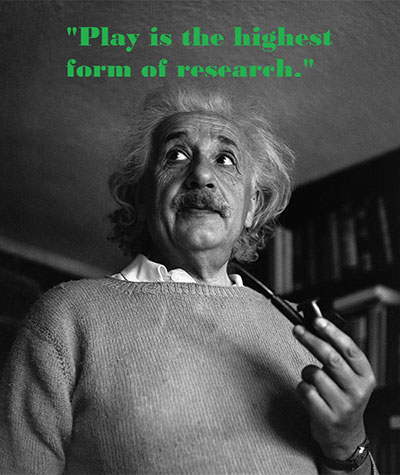 To simulate the diffusion of a bubble, we use the division of volume in spheres.

Fortunately, spheres have the largest surface-to-volume ratio, meaning bubbles are already ahead of the game.

However, by dividing this volume, the results yield an even higher surface area in relation to the volume split.

This may be hard to picture, but we’ll give you an example:

Let’s look at a single bubble with a volume of 1 cubic inch.

This single bubble would have a surface area of 4.836 inches squared.

What does this mean?

Diffusion increases surface area by dividing volume., which means that the division of one bubble results in a higher surface-to-volume ratio.

This division further encourages all effects of percolation.

The example of a single bubble dividing only once is only a fraction of reality.

In fact, remember how I mentioned that we can control the separation of bubbles?

Percs, also referred to as percolators, utilize multiple tiny slits or holes (depending on the design) to diffuse bodies of smoke into flurries of tiny bubbles.

These flurries massively increase the number of bubbles formed out of a given volume of smoke.

As you can imagine, this big disbursement of smoke results in a great surface-area-to-volume ratio when compared to a water pipe without a perc.

There are countless types of percs that can range from simple slitted downstems, to intricate double-layered tree perks, ufo percs, honeycomb percs, and much more.

Benefits of Percolation in Bongs

Enough beating around the kush—let’s dive into the three main benefits of smoking out of a percolator bong:

Add ice to your bong water.

Even room-temperature water will cool smoke – but if you use ice water instead, your rips will be frosty and smooth.

Many bongs also feature an ice-catcher attachment that cools the smoke after percolation. However, some studies have shown that the frost from ice cubes are inhaled, which can damage your airways and lead to bronchitis.

Inhaling tiny ice shards can mostly be avoided by rinsing the ice cubes, or letting them defrost in the pipe for a few minutes.

Due to the aforementioned heat transfer, steam is introduced into your bong rip.

This process adds a smooth vapor-like property to your bong rips without diluting flavor or THC (not to be confused with CBD).

Water pulls/attracts residual particles and filters your smoke on a magnetic molecular level.

The magnetic relationship between H2O and polar contaminants/particles is much simpler than it sounds. Here’s the deal:

Water is very polar; H2O is actually the most polar protic solvent. Substances that can pull through bowls like residual herb, resin, or ash are polar as well — some of the harmful shit that you’re usually inhaling through a dry pipe is magnetically pulled from your smoke as it passes through water.

Stoner bros will sometimes claim that you will lose out on your precious THC in the percolation process, and you’ll dull your high by smoking from a water pipe.

That's not really the case. 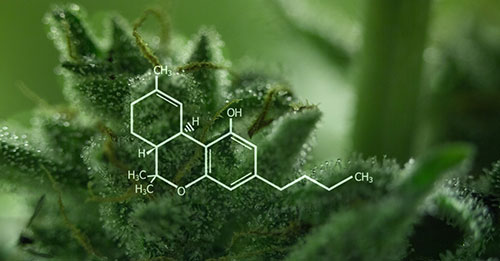 Tiny trace amounts of THC can be lost when using a bong, but it’s far from anything to worry about.

Tetrahydrocannabinol, or THC, is a lipid (examples of lipids would be oils or fats) meaning THC is mostly non-polar.

That being said, water does not magnetically pull THC out of your smoke as it does with polar particles; you may lose trace amounts of THC, but it wouldn’t be anything to fiend over.

If you compare the number of harmful particles that are pulled from your inhales, to the trace amount of THC lost—percolation is worth the minuscule trade.

Smoother percolated rips are also much easier to inhale, which allows you to take larger hits compared to a dry piece.

So at the end of the day, you’re getting bigger and cleaner rips. Larger inhales = more THC per rip.

With that being said, that stoner bro probably heard the same claim by another smoker who is also uninformed. Break the cycle with your newfound facts on percolation!

Do Bongs get You Higher than Blunts?

Think about it this way:

When you’re smoking a bunt, the cherry (the end of the blunt that’s lit) is always rolling. 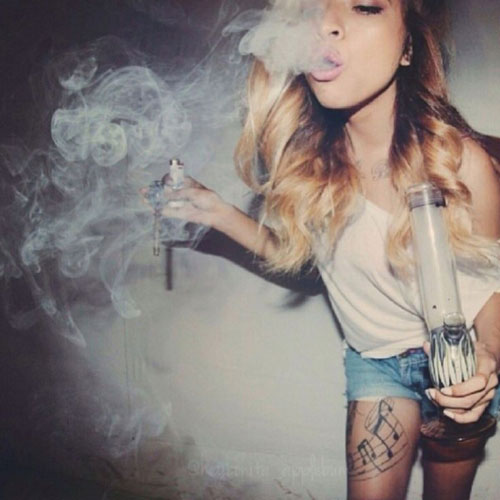 That means marijuana is being burned, even when you’re not inhaling.

Moreover, when you’re smoking a blunt, there isn’t any water to cool or filter the smoke, meaning the hits are going to be harsher than a bong.

Lastly, blunts don’t have a collection chamber for the smoke. Unlike a bong, which allows you to collect smoke in a large chamber before clearing the whole thing at once, blunts burn straight into your lungs.

They hit more harshly, and the hits aren’t as big.

Aside from a dab rig, bongs are the best way to smoke.

What’s the Point of Water in a Bong?

Water is the key to percolation in bongs.

Water cools and filters smoke while also hydrating your inhales.

Without any water for herb smoke to interact with, a bong is basically a dry pipe with loose hits.

Do Gravity Bongs Get You Higher?

Yes, gravity bongs will wreck you if you’re not careful.

A well-crafted gravity bong has the power to destroy you, tread lightly for sure.

This being said though, gravity bongs don’t utilize water for percolation.

Instead, gravity bongs use the weight of water to pull smoke from the bowl up top.

These contraptions get the name by using gravity as a synthetic inhale to draw smoke into the main chamber.

Glass Percolators and Bongs: What to Look For 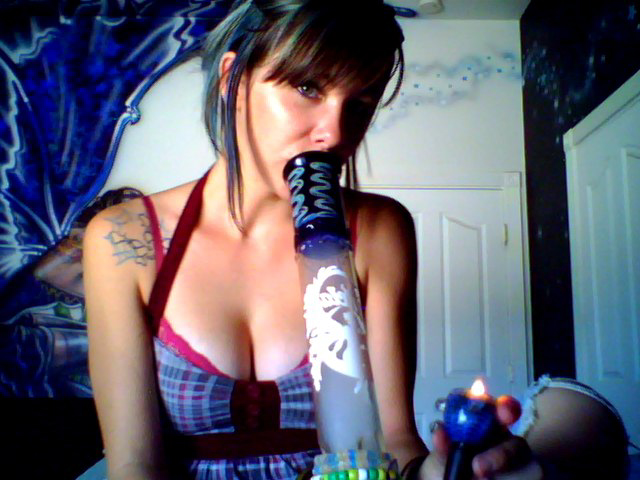 If the weld looks bulky and sloppy, recognize that this job was not done by a master; don’t pay top dollar for a poorly crafted piece.

You should also keep your eye out for recyclers.

Recyclers are water pipes that route smoke through chambers as a circuit.

Any access smoke that isn’t inhaled gets sent back through to the original chamber for another cycle. This process is said to keep your smoke from getting stale, thus ensuring fresh inhales.

How to Use a Bong 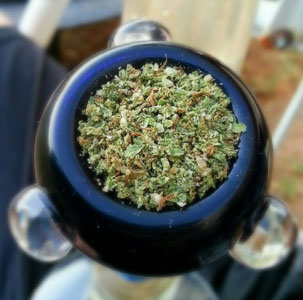 Using a bong is pretty easy, and they get you high as fuck. Here’s a quick tutorial that will show you how to use a bong, step by step:

Pack your bowl with ground weed – you don’t have to grind it, but the weed will burn more efficiently, thus conserving your weed. You’ll get higher, too.

Take a few deep breaths to prepare, and empty your lungs until they’re about 80% empty.

You want to have a bit of extra air in your lungs so that, when you’re done ripping the bong, you have extra air to blow the smoke out of your lungs.

Otherwise, you won’t be able to blow out all of the smoke, and you’ll start coughing.

Put your mouth over the top of the bong, ensuring an airtight seal.

Begin pulling hard enough to cause the water to bubble. Light the lighter over the bowl.

Don't hold the lighter on the bowl piece for too long.

It should only take one or two seconds before the bowl ignites.

After that, remove the lighter. The weed will burn on its own.

If you hold the lighter there too long, you'll torch the weed.

Once the bong is full of milky smoke, it’s time to clear it.

Some bongs have a shotgun (carb hole) while others have a removable bowl piece.

Take your finger off of the shotgun or remove the bowl piece, depending on your bong’s design.

Next, inhale hard and fast. You’ll clear all of the smoke from the bong, and inhale it into your lungs.

You’ll be flying in no time!